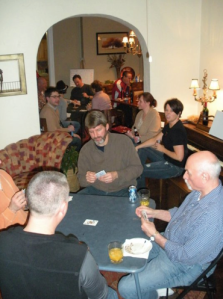 On a rainy Sat. in March, twelve teams competed in two divisions of hardcore McPherson Town euchre-playing. Nearly three hours later, the champion was determined. The winners, now possess the admiration of their neighbors as well as a jar of Frog Bubbles. The rest of us knew we were in trouble when the winning team came through the door in uniform. Everybody had a great time–players and hecklers alike.