After 20 years and many hours of McPeep play, it was time to replace our beloved playset in the neighborhood park. Neighbors came together to do a volunteer build of the new set on Feb.3. The new equipment was paid for with neighborhood funds raised through the bi-annual holiday tour. Since installation, it has been both kid and adult tested, and approved! 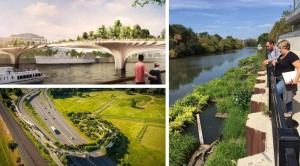 As part of the ongoing work for the Dayton Riverfront Master Plan, a design workshop (charette) for the next phase of design on Sunrise and Sunset MetroParks was held on Nov. 5 & 6, 2019 at the Masonic Temple. McPeeps are excited to see these plans come together for our nearby riverfront areas. See the results of the work in the public presentation.

In May 2016, a public meeting was held concerning Main Street/SR 48 Bridge over Great Miami River, which sits at the southeastern corner of the McPherson Town and connects the neighborhood to downtown.

Improvements are needed to address the deteriorated condition of the bridge, constructed in 1956, as detailed in this handout provided at the meeting.

Residents and other interested parties were able to review and comment on the planned rehabilitation of the bridge, including asking for pedestrian lighting and attractive handrails on the bridge; replacement of the bricks that memorialize inventors, allow people in cars to see the river, attractive architectural treatments to the exterior of the bridge similar to other bridges recently rebuilt in the city, infrastructure for cyclists on Main Street, as well as addressing the steep slope and lack of cross-walk at the north end of the bridge.

Since May, the Ohio Department of Transportation (ODOT) and the City of Dayton have been working to revise their plan based on feedback given at the meeting. Construction is slated to begin in 2018 and run through the fall of 2019.

Learn more about the history of the Main Street Bridge, first constructed in 1838, but replaced several times over the years, including a graceful 1892 version that was one of Dayton’s first concrete bridges and acted as a model for other bridges that existed downtown for more than a century and withstood the pounding waters of the 1913 flood.

Construction has begun on the second water feature at RiverScape River Run, the whitewater play park in the Great Miami River adjacent to McPherson Town.

Work on the $4 million River Run project began in July 2015. The first water feature constructed is built atop what was the Monument Avenue low dam. It spans the river near the Dayton Art Institute. The project should transform the low dam — a drowning hazard for many years — into a safe passage for recreational paddlers and a whitewater chute for kayakers.

The second feature sits in front of RiverScape MetroPark on the river – both will be easily accessible for neighborhood paddlers, fisherpeople, and observers.

McPherson Town is excited to have this new amenity on our front door step. 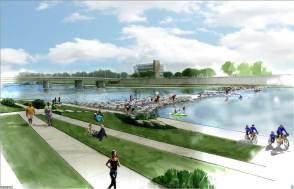 The North River Walk in Dayton is a beautiful levee-top walkway along the Great Miami River, between Main Street and the I-75 Bridge.

This walkway, adjacent to McPherson Town, now features a sunny, quarter-mile path of crushed limestone with concrete edges. It includes a swing and an accessible ramp as well as waste receptacles and dog-bag dispensers. Views of the downtown skyline are impressive from this North River Walk.

Many thanks to the Miami Conservancy District for these improvement to the walk, an amenity used daily by neighborhood dog-walkers, runners and commuters. 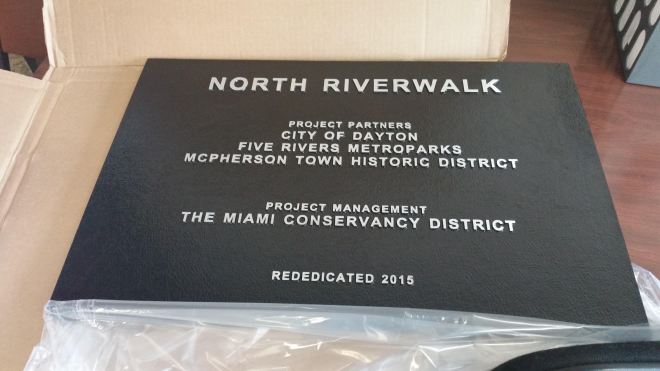 r more than two years, work on the levee protecting McPherson Town from the Great Miami River on the neighborhood’s southern border is almost complete. New trees were planted at the base of the levee in 2013 after the trees on top of the levee had to be removed for flood protection, followed by the replacement of a crushed stone walking path on top of the levee, new steps and hand rails, waste cans, doggie bag dispensers and finally these lovely swings (which were installed this week). New lighting is yet to come. Stop by for a spell, swing, and catch the best view of the city! 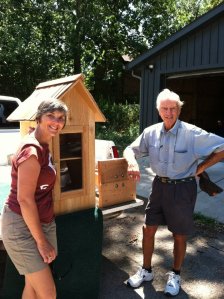 McPherson’s newest house has arrived. The McPherson Town Little Free Library is part of a national grassroots movement to promote the love of reading and build a sense of community. The house was built by the father of one of the neighborhood residents and was installed in the neighborhood park. Neighbors quickly stocked the library with books of all kinds. Stop by and check it out!

RiverScape MetroPark, just across the river from McPherson Town, has been so successful in bringing people to the river. Now, River Run will get people into the river. Backers of the project to remake the Great Miami River downtown into a water recreation attraction say they’ve raised $3.8 million and will now seek cash contributions from the public to raise the remaining $200,000.

UPDATE! On Oct. 25, 2012 – The Downtown Dayton Partnership announced that the $4 million goal has been met! Construction begins in 2013.

In cooperation with the Miami Conservancy District, City of Dayton and Montgomery County (and as part of the ‘Rivers, Cycling & Active Lifestyle committee of the Greater Downtown Dayton Plan), Five Rivers MetroParks has just announced its proposal to remove the Monument Avenue low dam and install two grade-control whitewater/bypass “canoe” channels that will make the Great Miami River navigable through downtown and past Carillon Park.

If plans are realized, a river access point and parking may be added to McPherson Town as soon as 2013.

Before the project can proceed, agreements would be reached with the Miami Conservancy District and city of Dayton. Permits will have to be obtained from the U.S. Army Corps of Engineers and Ohio Environmental Protection Agency. Permitting will take at least a year.

For more info, check out this article on Dayton Most Metro

The Ohio Department of Transportation has recently finished erecting noise abatement walls along I-75 on the west and north borders of McPherson Town. These solid noise walls not only reduced the sound from passing traffic, they also look great and give the neighborhood a cozy feel.

The relief on the I-75 side has the greatest depth (3 inches). This is because the wall is viewed at higher speeds by vehicular traffic. The pedestrian side has a shallower relief (½ inch). This is because local and pedestrian traffic views the wall at slower speeds and there is the possibility of the wall being obscured by vegetation. This concept was reached by concensus between ODOT and Dayton city officials.

The walls not only reduce noise by up to ten decibels — an audible halving of the noise — but help to block dirt from the road.

McPherson Town thanks ODOT and the City of Dayton for their cooperation in getting the walls in place!